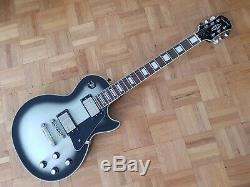 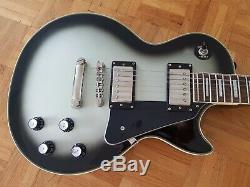 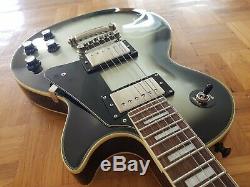 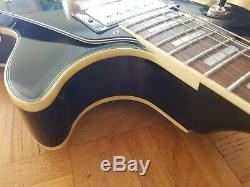 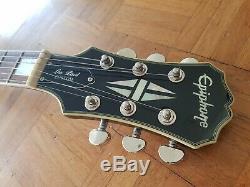 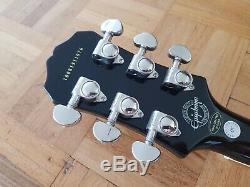 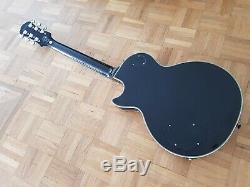 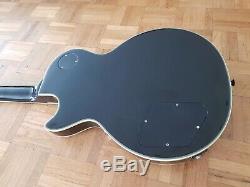 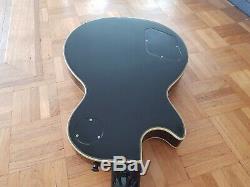 APPROACHING 14000 TRADES FEEDBACK 8621 AND COUNTING... THE OTHER BUYERS WERE TOO LAZY TO LEAVE FEEDBACK! BEAUTIFUL CONDITION, AND 1O YEARS OLD. THIS IS THE LES PAUL CUSTOM LIMITED EDITION. THE LES PAUL CUSTOM LIMITED EDITION WAS ONLY MANUFACTURED IN THIS COLOUR FOR A A VERY SHORT PRODUCTION RUN OF 1 YEAR BETWEEN 2010 AND 2011. Epiphone's LES PAUL CUSTOM Limited Edition - The Tuxedo Les Paul Custom made its debut in 1954 after the initial success of the Les Paul Goldtop. Les Paul himself wanted to convey to audiences that the solid body electric guitar was not a fad but a superb and challenging instrument and that his signature axe, the Les Paul, was the king of all electric solid body guitars. So, Les requested a Les Paul with a custom color finish in solid black and solid white with gold hardware that would blend well with a tuxedo. The result was the Les Paul Custom, or the tuxedo Les Paul, as it became known among fans. The Les Paul Custom quickly became one of the most recognized guitars in the world and Les himself used his Les Paul Custom in concert, on his weekly television show with wife Mary Ford and on his album covers, including his famous duet with pal Chet Atkins, Chester and Lester. While all Les Pauls share common design features, the Les Paul Custom distinguished itself from the Les Paul Standard and Les Paul Goldtop with a solid mahogany body.

Just like Les personal Custom, this Les Paul Custom has a solid mahogany neck with a 24.75 scale thats hand-fitted with a glued-in joint for optimum neck-to-body contact, which allows the Les Paul Custom to resonate as one solid piece of wood. The rosewood fingerboard features mother-of-pearl block inlays and has a 12 radius, a 1.68 nut and 22 medium-jumbo frets.

The mahogany neck has a very comfortable and super fast SlimTaperTM D profile, the most popular profile found on todays Les Pauls. The Custom also features beautiful 5-ply (white/black) binding around the maple veneer top and the back along with single-ply cream binding around the body. The classic rosewood fingerboard is bound in white and the clipped dovewing headstock features 5-ply (white/black) binding along with a 50s era/Custom-style split diamond mother-of-pearl inlay and, of course, a vintage Epiphone logo in mother-of-pearl.

T he weight of the LP Custom is around 10lbs so we suggest as wide a strap as possible if you're gigging. On the Plus side, this weight adds a great deal to the overall tone offering a really t traditional Les Paul performance. But both can really get down and dirty with some overdrive.. This a superb rock guitar at a 1/4 of the price of a used Example of its Gibson cousin.

THIS "EPI" LP Custom was made at the. Quindao Plant, China, in AUGUST 2010. YOU WILL STAND OUT FROM THE CROWD AND BE THE ENVY OF YOUR PEERS.. THIS LIMITED EDITION EPIPHONE IS JUST GORGEOUS... The dark spots /circles that you may see on the pics of the back of the guitar are just reflections of our ceiling spotlights.

This guitar will play classic rock and blues, but it suits punk and will belt out metal perfectly as well. THIS GUITAR IS A ROCKER. GREAT ACTION AND usual classic LP SOUND!! MESSAGE US NOW, FOR AN EVEN BETTER PACKAGE DEAL! WE ARE A SMALL OUTFIT SO ALL GUITARS ALWAYS CAREFULLY INSPECTED BEFORE DISPATCH.

NOT JUST SENT FROM A WAREHOUSE! WE USUALLY HAVE A STOCK OF PRACTICE AMPS AND HARD CASES IN STOCK! PLEASE ENSURE THAT YOU SUPPLY US WITH NAME, ADDRESS, POSTCODE & DAYTIME TELEPHONE NUMBER FOR THE COURIER COMPANY.

OUR CARRIER DOES NOT SERVICE THESE AREAS AND A QUOTATION WILL HAVE TO BE MADE IN ANY OF THE ABOVE CASES! ITEM CAN NOT BE COLLECTED FROM US HERE. MADE FROM ONLY QUALITY MATERIALS BY GIBSON EPIPHONE GUITARS.

The item "2010 EPIPHONE LES PAUL CUSTOM, SSILVERBURST LIMITED EDITION BEAUTIFUL CONDITION" is in sale since Thursday, June 18, 2020. This item is in the category "Musical Instruments\Guitars & Basses\Electric Guitars". The seller is "gselecta" and is located in ESSEX.

This item can be shipped to United Kingdom.