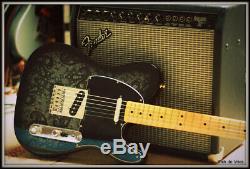 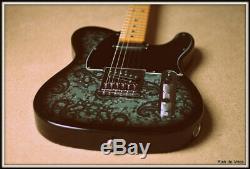 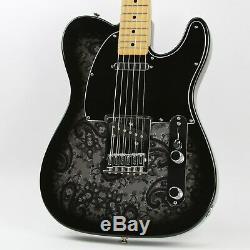 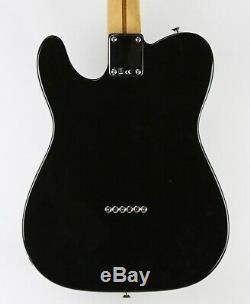 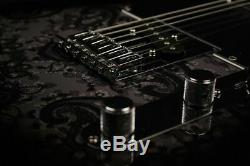 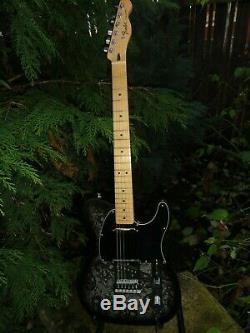 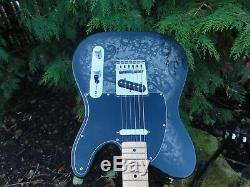 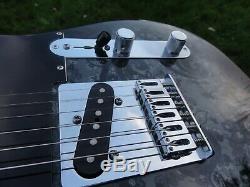 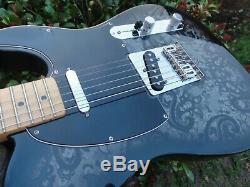 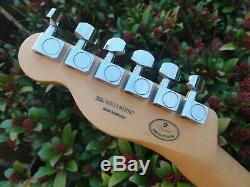 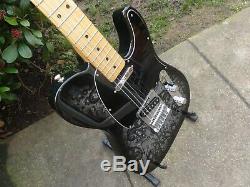 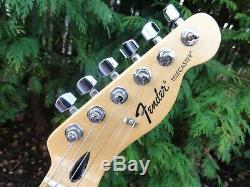 Fender FSR Black Paisley Telecaster - Special Limited Edition. This is a rare guitar you can't get your hands on, with apparently only 32 entering the UK and is only going'up and up' in value. It is in immaculate condition , with only light plectrum marks on the pick guard and a bit of tarnishing on the bottom strap pin. One tiny little white mark on the front, so insignificant you won't care.

Strings need replacing, as guitar has been in storage for a long time. It has heavy knurled knobs. Pictures - I can't get a good photo, as it is like trying to photograph a mirror. Understand that it is exactly like the stock photos - they are all identical, but the stock photos show the beautiful green undertone, when the light catches it in a certain way, which I simply can't replicate with my camera, but I've added a few for you too. Please trust me - this is superb, and absolutely gorgeous.

It's not a normal Fender - it's a Fender'Special Edition'! You will have to take my word for it, that the guitar is simply amazing condition, and any mark you see in the pictures, is'not' there, and is a reflection.

The action is crazy low at about 1.5mm. It comes with the original black Fender gig bag. I wasn't going to sell this, but it's Christmas, and my daughter needs a camera.

I'm a guitarist of over 40 years so any questions don't hesitate. Not many postal days left! The following is from the Internet when the guitar came out.

Can We Show You Something in Black Paisley? Aesthetically, the Fender Black Paisley Telecaster does for the solidbody electric guitar what the Stealth Fighter did for aviation. An elegant axe ostensively inspired by the legendary infamous? Teles of 1968, the Black Paisley manages to look menacing and beautiful at the same time.

When you take the stage with Fender's Black Paisley Telecaster, you. This axe has a fascinating backstory. Fresh from the Summer of Love, Fender got to work on what were to become icons of the flower power era. Launched the following year (1968), Fender's Paisley Red and Blue Flower Telecasters were based on standard production maple-fingerboard Teles and were meant to capitalize on the quickly-commercialized psychedelic craze that was sweeping the globe (You may have have already noted - perhaps with a shred of cynicism - that Fender at the time was firmly in the corporate clutches of CBS).

These colorful guitars, interestingly, didn't catch on with their intended rock customers. Ironically, one of the most high profile guitarists to adopt the Paisley Tele was country session great James Burton, who played his'69 model until his signature Fender model was introduced in 1990. The Black Paisley Telecaster - underneath its cool psychedelic/stealth exterior - is a Standard Series Tele, for which Fender has designed a new bridge block that's the best of the vintage and modern designs.

It features six adjustable saddles, and a strings-through-body design that seriously juices your sustain. Another historical note: vintage Teles - including the psychedelic ones of the late'60s - came with a large "ashtray" bridge cover that got no love from guitarists.

Most (if not all) players promptly removed it, and when Fender (or should we say CBS) finally got wind of this trend, they dispensed with Tele bridge covers for good. The original Tele pickups had more twang than any two "normal" guitars, thanks to the single coil pickups in the bridge and neck positions and the strings-through-body Tele bridge. Today's Standard Tele sports pickups that pretty much look the same, but are voiced hotter, so it's much easier to drive most amps into various levels of distortion, from mild to manic. So, tonally, you get the best of both worlds: this Tele's a total twang beast.

Chrome 6-saddle strings-thru-body Tele bridge. Courier - I send all my guitars via Parcelforce 24hr, but it's Christmas & they are busy so be patient.

Check out my other guitars - plus my feedback. The item "Fender FSR Telecaster Black Paisley Special Limited Edition Mint condition" is in sale since Saturday, December 14, 2019. This item is in the category "Musical Instruments\Guitars & Basses\Electric Guitars".

The seller is "flossyworld" and is located in runcorn. This item can be shipped to United Kingdom.