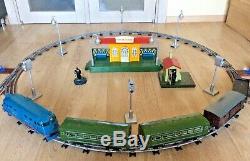 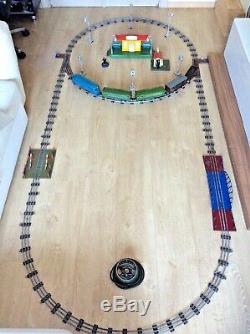 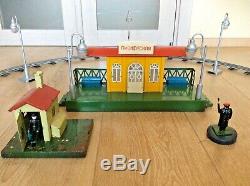 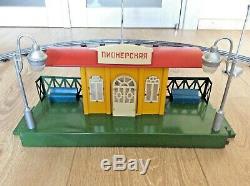 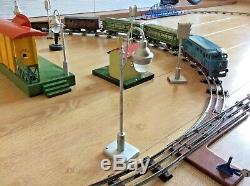 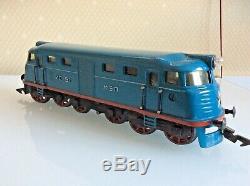 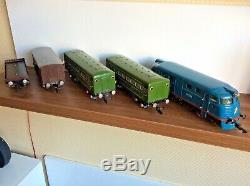 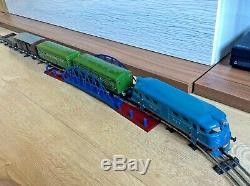 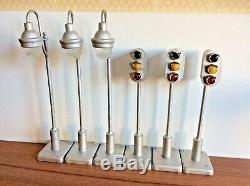 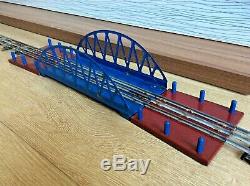 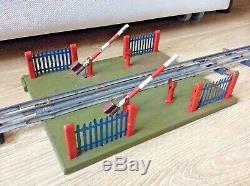 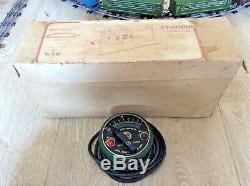 Railway PIONERSKAYA Stalin Engine Train USSR 1955. All parts in COMPLETE including connection cables. The toy railway was produced by the Moscow plant Projector on the Enthusiasts Highway and was one of the most complex and expensive electromechanical toys of the late 50s. The toy began to go on sale from about 1955 and lasted about 15 years. Until 1961, it cost 360 rubles. More often, the road was bought by budget organizations of children's creativity - the Palaces of Pioneers, clubs and circles of young technicians. The kit includes: an electric locomotive of blue or green color, two passenger cars, one covered trolley, one open platform, station, switch cabinet, railway crossing with fencing, lights, semaphores, a person on duty at the station on the stand, 2 arrows (translated by hand), bridge, rails, gearshift.

Total length of the path: 9.3m. The power supply of the locomotive is supplied along a three-track circuit from the control transformer with a smoothly adjustable speed. The road scheme includes a large rail oval and a small inner circle with two arrows.

Electric traffic lights are installed along the tracks (they switch automatically). The road has several structures made of metal: the bridge, the station building, the crossing with barriers (they close automatically when the train passes), and the person on duty at the crossing (leaves the house when the train passes). Lighting is also foreseen - when moving, the headlight of the locomotive lights up, the light in the passenger cars, street electric lights are installed. 1 house with a traffic controller. 1 Box with a set of wires for connection.

There is rust on the rails. Painted parts show age-related signs of wear, such as scratches. The function of the electrical parts is not checked. The item "Railway PIONERSKAYA Stalin Engine Train USSR 1955 FULL COMPLETE IDEAL CONDITION" is in sale since Sunday, February 17, 2019. This item is in the category "Toys & Hobbies\Model Railroads & Trains\Rare Scales\Other Rare Scale". The seller is "antikvar-world" and is located in Kiev. This item can be shipped worldwide.