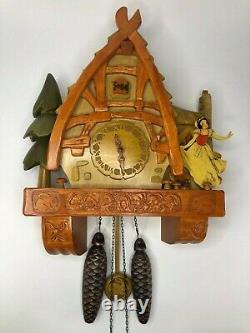 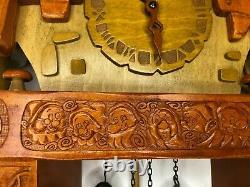 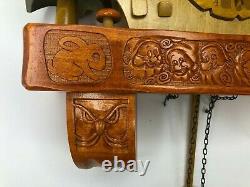 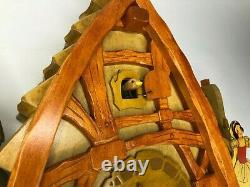 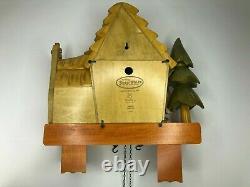 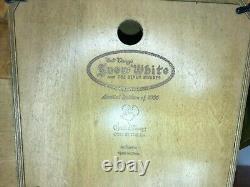 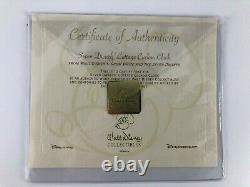 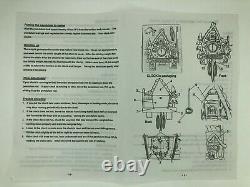 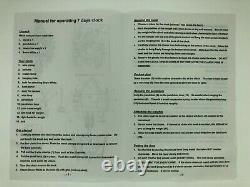 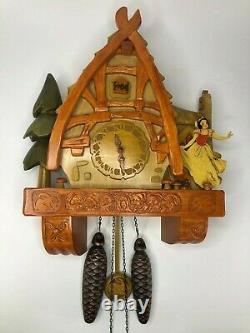 RARE - Disney Snow White Wooden Cuckoo Clock - Limited Edition - MINT. This Disney Snow White cuckoo clock was from a Limited Edition of 1000 and was available for a short time in 2006 and has been sitting in its unopened box in my guest room for all these years! This large cuckoo clock actually appears to be made of wood, which is rare for Disney. Its an actual cuckoo clock with an eight day, ten jewel movement and not a cheap, plastic electric clock that just looks like a cuckoo clock. This clock was designed by famed Disney artist, Jody Daily, who is known for designing the artwork used in numerous Disney parades, in addition to collectible artwork for many of Disneys attractions and films. All seven of the Seven Dwarfs appear in bas relief along the base of the clock, along with a rabbit and an owl on each side. The style and detail very faithfully capture both the 1937 Disney animated feature film and the beloved Fantasyland attraction. Snow white is singing and dancing along the side of her cottage with a big pine tree on the other side and mushrooms sprouting out of the ground. The clocks counter weights are very large and heavy metal acorns.

I have a decent sized Disney cuckoo clock collection and these counter weights and this clock are the biggest in my entire collection. The clock body by itself is approximately 18 tall and 16 wide, the pendulum (another rabbit) hangs down below the clock by another 4, and the acorn counterweights hang down by up to six feet if the clock runs all the way down. Every half hour, the shutters covering the little window near the top of the clock open and a little bird appears and cuckoos once and then the shutters close again. Every hour, on the hour, the shutters open and the little bird cuckoos once for each hour.

Its very cool that this is done without a microprocessor; just good old fashioned mechanical ingenuity. This piece comes in its original box with all original items, including the instruction sheet and the Certificate of Authenticity (COA), indicating that its from a limited edition of 1000. The piece was only removed from the box to inspect and photograph it and is in brand new, mint condition. If you notice any small white dots in the photos, theyre likely just tiny bits of styrofoam from the packaging.

The item "RARE Disney Snow White Wooden Cuckoo Clock Limited Edition MINT CONDITION" is in sale since Sunday, October 4, 2020. This item is in the category "Collectibles\Disneyana\Contemporary (1968-Now)\Limited Editions". The seller is "scott94086" and is located in Marina, California.