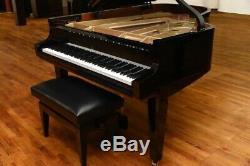 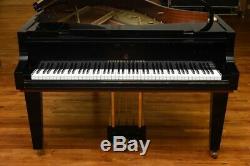 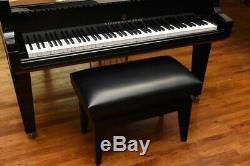 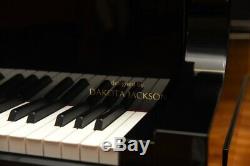 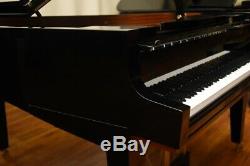 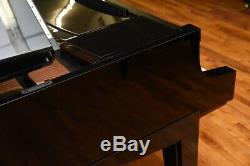 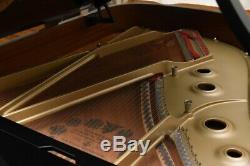 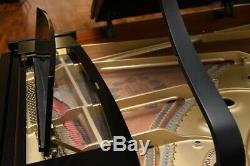 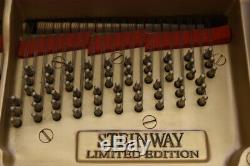 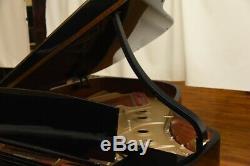 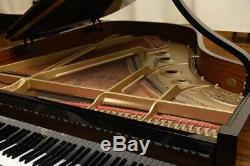 Steinway A Hamburg in conjunction with the Steinway Factory in NYC. Very Rare Limited Edition Hamburg A in a NYC Steinway Dakota Jackson Case. Read Below about this great piano.

In order to reflect Steinway pianos international appeal, this particular piano combines the expertise and craftsmanship of both Steinway factories. This Limited Edition design embodies Steinways tradition since 1853 of creating each piano by hand, while celebrating how this extraordinary instrument changed the world of music.

As a renowned designer, a pianist, and a Steinway aficionado, Dakota Jackson was a natural choice to design the Tricentennial. To me, Jackson says, Steinway is synonymous with Piano. I wouldnt consider designing a piano for any other company. As Jackson approached the complex task of creating a design that would be innovative while maintaining the traditional beauty of the Steinway piano, he was aware that great care had to be taken. The very simplest alteration to the classic form would require a change in the way people perceive the piano, he says.

After all, it has been an iconic symbol for three centuries. Therefore, any alterations could be considered only if they enhanced the design and validity of the piano. As a first step towards creating the new Tricentennial design, Jackson reduced the piano to its essential form a wood case enclosing a cast-iron harp or plate - and began designing it from the instruments soul out.

Jackson asserts that the final design of the Tricentennial breaks with traditional piano design by creating a continuous, flowing line from the back of the piano to the floor, merging the pianos body and legs. Typically, Jackson says, this flow is interrupted with a series of stepped details reminiscent of classic Hellenic columns and structures. Aside from reconceiving the overall look of the grand piano for the Limited Edition Tricentennial, Jackson also redefined many of the pianos individual components for heightened functionality and elegance. Lid design: when open, the lid folds back on itself in a series of tapered sections, which fall at an angle, creating a fanned effect. Lid topstick: the topstick hugs the cases inside S curve when the lid is closed, and becomes a striking design element when opened.

Music desk: designed to hold sheet music like a pair of open hands, the angular music desk is mounted on a bearing to roll smoothly toward and away from the player. The pianos lines: the rim line slopes down at a 6-degree angle as it approaches the tapered leg, and then takes what Jackson calls, a dramatic turn toward the floor.

The rim and legs: the rim is raised in back, and the rear leg has been pulled forward and inward, creating a cantilever. All three unadorned legs taper gently to the casters on which they rest. Dakota Jackson was chosen to collaborate on the design of Steinways Tricentennial grand piano not only because he is one of Americas foremost furniture designers, but because his creations are noted for their pure, clean lines that celebrate function and beautifully uncluttered form. Jackson began building his reputation for furniture design more than 35 years ago, and he has created couture, one-of-a-kind pieces for celebrities and private residences around the world. Moreover, his corporate client list is filled with names such as Estée Lauder, The Four Seasons Hotel in New York, and The Regent Hotel in Hong Kong, as well as the executive offices of General Motors, IBM, Dell Computers, Columbia Pictures and Time Warner.

Growing up in a family of magicians in New York City, Jackson toured the country as a child performer, later turning his creative focus to custom-designed furniture for the private and corporate clients listed above. Jackson says that innovative design is inextricably linked to innovative technology, and he approached the Tricentennial design on that basis.

A lecturer at design schools and museums across the country, Jackson has won numerous design awards, including a National Endowment of the Arts Award, and an American Institute of Architecture Award for the design of a Winnetka, IL synagogue designed in collaboration with H. In 1998, Jackson also collaborated with well-known architect Peter Eisenman on the design for a Dakota Jackson showroom in the Pacific Design Center in Los Angeles. Jackson designed the David Yurman Boutique on Madison Avenue, and currently is designing the chapel at the North American headquarters for the Union of American Hebrew Congregations, both in Manhattan.

Jacksons furniture is displayed in museums throughout Europe and the United States, and his company has 20 design showrooms across the country. The companys main showroom is in Manhattan, and its two factories are in Long Island City, N. Where Steinway & Sons North American headquarters and factory are also located. With Piano Disc Player System. Leg Matching Jansen Artist Adjustable Bench Hydraulic This lovely Steinway Grand has a German Sweet tone to it. The piano is from a home with a light amount of play. 1/2 the price of a New One if made today. # 158 in the series of pianos like this ever made. We stock over 38 Steinway Grands.

Over 20 Model B's and A III. Plus L and Model M. Research who we are and you will enjoy the benefits of doing business with Concert Pianos Maestro Bruno. A Red Bird LLC Company. 95% of the Steinway's that you will play are serviced to a "De Capa" level.

Experience what a Steinway Grand can really sound like when it is service by a True Concert Technician. The item "Steinway Hamburg A THE TRICENTENNIAL LIMITED EDITION #158 Pristine Condition" is in sale since Tuesday, May 12, 2020. This item is in the category "Musical Instruments & Gear\Pianos, Keyboards & Organs\Pianos\Grand & Baby Grand Pianos". The seller is "concertpianos" and is located in Dallas, Texas. This item can be shipped to North, South, or Latin America, all countries in Europe, all countries in continental Asia, Australia.